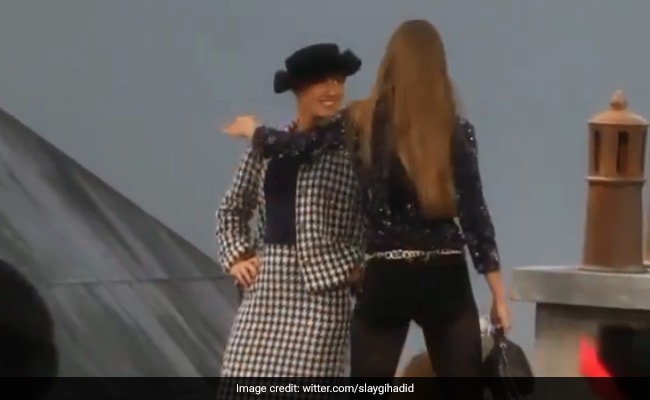 Guards realised that the gatecrasher joined the models when it was too late to intervene.

PARIS: A gatecrasher jumped onto the catwalk at Chanel’s Paris fashion week show Tuesday and walked unchecked with the models for the big finale.

The woman, a guest at the show, ran down from her seat and joined the models as they did their last walk along a spectacular set recreating the roofs of Paris inside the Grand Palais.

With security guards left floundering, supermodel Gigi Hadid eventually confronted the gatecrasher as she tried to further upstage the models, and escorted her off the set.

The daring infiltrator was dressed from head to toe in a black and white Chanel-like tweed suit and hat, and slipped unnoticed onto the catwalk.

Guards only realised that she had joined the models when it was too late to intervene.

“I couldn’t stop laughing because the hapless security guards couldn’t spot her in the line-up,” said the New York Times’ Elizabeth Paton.

By then the woman — who has yet to be identified — was giving it her all, waddling down the catwalk with her hands on her hips like a supermodel.

For a Halloween costume, try Zayn Malik, a sexy witch or Iris Apfel. Photograph: Getty Images/Alamy Unless you pricked your finger on a spindle and fell asleep in a tower for the past century, you will have noticed that Halloween is a pretty major deal these days. The days when autumnal party thrills meant catherine […]

Heart of darkness: our pick of the new dramatic eyeshadows. This is how you make an entrance. The Dior eye palette used here, of rich green, prunes, and blues marked Peter Philips’s first official colour collection for Christian Dior Make-up, so they had to be memorable. And what could be more bold than a massive […]